This very large rank of pipes, called the Open Diapason, is originally from the Moller organ that once lived at St. John of God (as you know, where the facade and other aspects of St. Raphael were sourced). Most of that organ is likely long destroyed. We are lucky to have some parts of it.

In a way, this stop is a continuation of the 8′ Principal (or Open Diapason). However it is made completely of wooden pipes, and is independant to the pedal division. It is only 32 notes. Sometimes this may also be called a “double open diapason”. These pipes are very large, the longest over 18 feet!

This stop will provide an awesome bass sound to the organ! It was powerful in St. John’s, and it will be in St. Raphael’s as well.

While this rank was initially not a priority, I decided to make it a priority after assessing its condition. It had been stored in the parish barn since its retrieval, and was suffering water damage, mice, and raccoon invasion! It needed to be removed immediately and cleaned and properly stored until repairs could be made. This is a very valuable set of pipes (would costs 10s of thousands to make today), and thus should be saved.

The chest, which is 10 feet long, holds all 32 pipes. It is in need of a complete restoration. Currently, the chest has been cleaned, and is ready for all new valves, shellac where needed, new magnets where needed, wiring, and so on.

The pipes have mostly been cleaned. All pipes will be refinished. The damage done by the raccoon poop was just too much to mend. It will turn out more uniform to just refinish everything. Also new tuning slides will be made, and affixed to the outside of the pipes, rather than internally. While the internal tuners look better, they are impractical to use!

This rank of pipes will live on the back wall of the choir loft. I can’t wait for their completion! 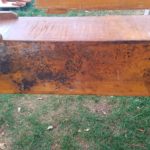 This is AFTER the piles of raccoon crap had been scrapped off. 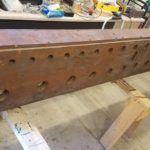 The 16′ Open Diapason chest before being opened up. 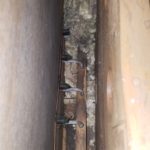 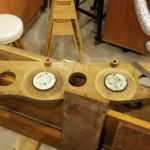 Can you see the mice damage? 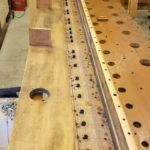 The 16′ Open Diapason chest has been cracked open. A thorough cleaning can begin!