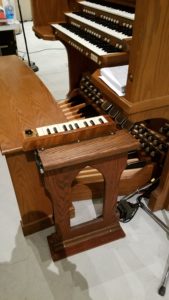 The 25-note Deagan chimes were originally installed at the first barn church. For several years they sat in storage at the new St. Raphael’s. They were installed in early 2019. Currently, the chimes are played independently via its own, small keyboard. Eventually, they will be incorporated into the organ console itself. You may hear these as postlude music after weekend Mass!