Like the 16′ Bourdon, the Gedeckt is also a “stopped” kind of pipe, meaning it is closed on one end by a tuning stopper, which effectively doubles the length of the pipe. So an 8′ pipe only needs to be 4′ to make the same frequency as a regular open-ended 8′ pipe.

This rank of pipes is also more appropriately referred to as the “Flute D’Amour”. “Gedeckt” simply implies a stopped pipe.

Audsley writes about the Flute D’Amour:

(French – Flute D’Amour) The name given to certain small-scaled wood stops, producing a delicate and fascinating quality of flute-ton.

The repairs made to the 16′ Bourdon are very similar to the 8′ Gedeckt and its chests. The only different thing is that instead of cork, the stoppers are lined with leather. Due to the cost of leather, I only repaired the stoppers that were in the most urgent need of repair. All stoppers were sealed or resealed with tallow. Eventually, ideally, all stoppers will receive new leather.

Another thing different about the installation of these smaller pipes, is how they are supported. The large 16′ bourdon pipes generally are attached to a common rail. However, these smaller pipes are only held at the bottom, or the “foot”. A process called “racking” brings the pipes into vertical and horizontal alignment. This helps them look pretty, but also keeps them from falling or vibrating on other pipes.

Please see the picture gallery below for more details! 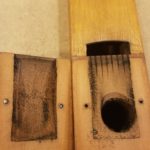 Cleaning out the mouth of the pipe. 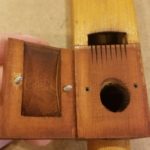 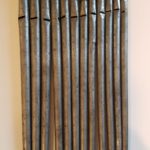 The topmost pipes before cleaning 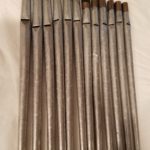 The topmost pipes after cleaning! 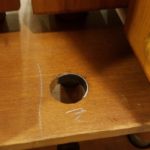 Some rubber cloth is used to balance the pipe left/right/front/back. 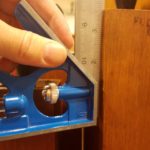 Seems to be level! 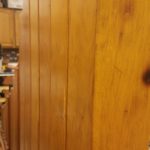